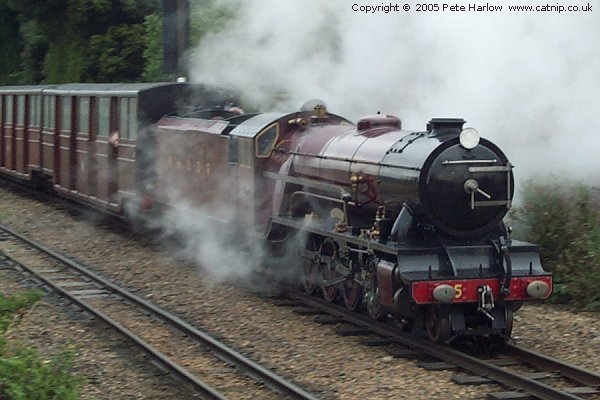 On my last trip to the UK, I had planned to make a visit to the Romney, Hythe and Dymchurch Railway on the way back to Dover to catch the ferry. After a week of lovely weather, conditions deteriorated and I was caught up in bad traffic on the A 27. I arrived at Dymchurch just in time to photograph the last trains in each direction, with just about enough light to get a reasonable picture.

Locomotive No 14 has been named 'Captain Howey' after the founder of the Romney, Hythe and Dymchurch Railway. 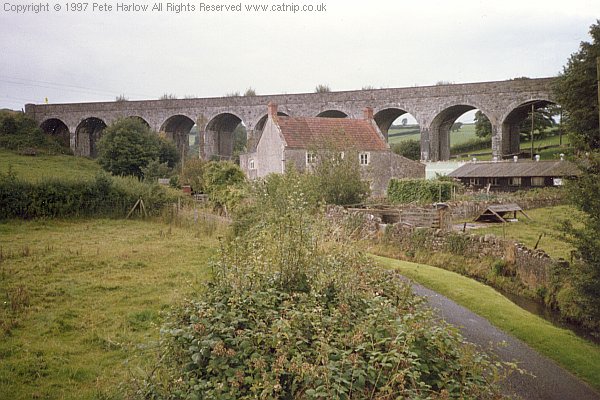 This viaduct was one of many on the old Somerset and Dorset line. It was demolished not long after this photograph was taken, and as can be seen below, there is now little evidence a railway ran across this valley. 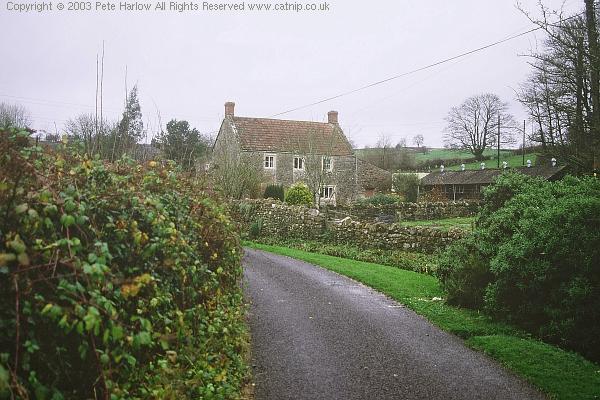 Today birdsong replaces locomotive whistles and the nearest thing to steam is the mist rising from the ditch alonside the road. 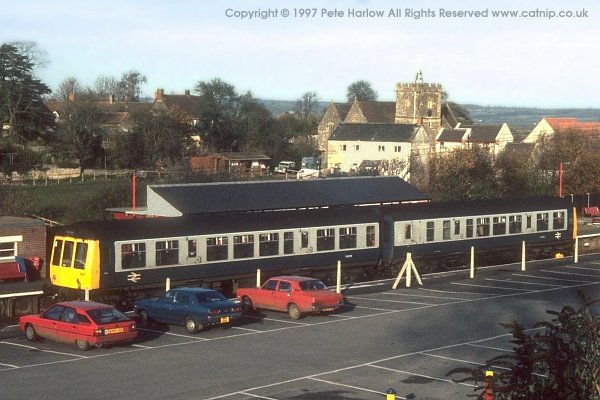 A trip down a branch line on one of these trains used to be the best way to see rural England. 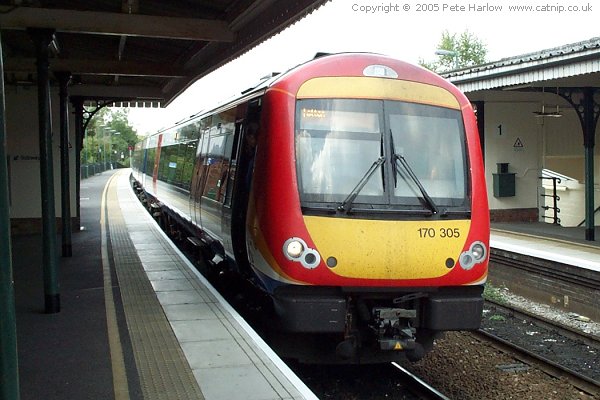 It is funny how some railway journeys stick in the mind. I have vague memories of catching a steam express from King's Cross as a child. Then there was the time my wife and I caught the last train from Bath to Romsey. Passenger accomodation was a single Mk I compartment coach tacked onto the back of a parcels train. On a warm July evening we had had a meal and a pint or two in a pub in Bath, then we settled back in a compartment to watch the lights slide into the twilight as the train climbed out of the city. There was the cab ride along the Kowloon - Canton railway, through the inky blackness of Beacon Hill tunnel, and out into the sunshine alongside the Shing Mun river... But the journey the photograph above recalls goes back to when I used to catch a train from Templecombe to Southampton on an almost daily basis. In those days the service between Templecombe and Salisbury was operated by a class 50 diesel electric locomotive and a rake of Mark II coaches; the Salisbury to Southampton service comprised a "Hampshire" DEMU set. Normally on the return the DEMU would leave Southampton towards Bournemouth then take the branch to Romsey at Redbridge junction. The "Hampshire" DEMU had a single compartment behind the driver's cab at one end with no corridor connection. I found that if I got in this compartment, and, at stations, ruffled my hair up a bit and leant out of the window, very few people would ask me to move so they could share the compartment. Ah, the Englishman's dream - a railway carriage compartment to himself! Anyway, on this particular day it was unusually hot and the points had siezed at Redbridge. Thus the train reversed to Redbridge station where it was announced that it would run non - stop to Romsey via Southampton, Eastleigh and the (then) Eastleigh - Romsey freight line. And I had the compartment to myself! What a wonderful run through the countryside - the old DEMU just chugged along, warm air wafting through the window - a trip I'll never forget. Well sometimes things go a full circle, and in 2003 the Eastleigh - Romsey line was once more opened up to passenger traffic, and Chandler's Ford station reopened. On my last trip to the UK, I found that a service operated from Totton via Redbridge, then Southampton and Eastleigh to Romsey so I was able to retrace the previous journey almost exactly. The unit was a modern DMU, and the picture above shows it at Romsey, waiting to make the return trip to Totton.

Tales from the shed...

...or more accurately, caravan. In the age in which I grew up, it was every young boy's dream to be an engine driver. Well, I got my chance, if only for a little while.

When I was a young boy, I lived in Bournemouth in southern England. In the locality there were two miniature railways of 10.25" gauge on which I liked to ride. One was at Poole, hauled by one of a stud of three 'Atlantic' type locomotives, the other at Christchurch, which had a scale replica of the L. M. S. R. 'Coronation' class 4-6-2 locomotive. The Christchurch track went round the outside of the car park near the local holiday camp, and thus featured a level crossing, as well as a 'tunnel' made out of corrugated iron.

In the fullness of time I became a student, and like most students, short of cash. So I was surprised when a fellow student called and said he was driving the train at Christchurch over the summer, and they needed another driver, was I interested?

Well of course I was. Even if the pay was only a little more than the cost of the petrol I would have to put in my old Triumph 750 motorcycle to get there, it certainly beat washing up in the pier restaurant.

When I started I was sad to find that the scale steam engine was no longer in use, the boiler certificate having long expired. 'The children of today aren't interested - they wouldn't know what a steam engine was' said the boss, a sentiment thoroughly repudiated by Brit Allcroft a decade later. We used to push it out on the siding and polish it up, and every now and then an enthusiast would come along and drool.

The motive power in use was a completely different affair - loosely based on the 'Casey Jones' perception of the American steam era. Power was provided by a life - expired 2 - litre Perkins diesel engine which came, I was told, from an old London taxi cab. As for the rest of it, it was anybody's guess. The controls were simple enough - an ignition key, hand throttle, car - style gear change, foot clutch, hydraulic locomotive brake and cable train brake. Starting it was a different matter.

So - arrive in the morning, go to the caravan and put the kettle on. Then open the shed and push the rake of open 'coaches' out onto the main track, change the points and push the coaches into the station. Push the loco out of the shed and connect a hefty charger - starter to the battery. All this activity, of course, caught the attention of the younger members of the public out for a walk on the grass leisure field next to the site of the railway, and a crowd started to gather.

Be that as it may, the next part of the starting ritual had to be faithfully observed. Nip into the caravan, put some tea in the pot, fill with water and allow to brew. Meanwhile, a quick trip into town to the local motor accessory store for a can of Easy-Start. For those of you who are not petrol - heads, Easy-Start is a highly volatile mixture of things like acetone designed for aiding reluctant internal combustion engines to start.

On returning to the caravan, the young clientele would be starting to get agitated, but no matter. You can't rush these things, and besides good things are worth waiting for. I know. A toucan told me.

A cup of tea later, and the battery on the loco would be bubbling nicely. So, off with the side panel and air filter, and empty the entire can of Easy-Start into the inlet tract. Air filter and panel back on, now for the moment of truth. Into neutral, disengage clutch and open the throttle two notches. Ignition on, glow plugs on, count to ten for the glow plugs to heat up. And fire! Strained wasn't the word for it. Eeeeeeyonk! Eeeeyonk! The sump oil must be turning to treacle again. Eeeeyonk! Just as well, it stops the ends from rattling. EeeeONK! and a big smoke ring rises into the air. onka - onk! Good. Its catching! onka-onka-onka-ONK-ONK (let go of the starter) ONK! ONK! ONK! Hooray! It lives. Just as well that this was long before environmental concerns came to the fore, because at this point the carbon genie well and truly got out of the bottle in the form of a huge pall of thick black smoke, which invariably drifted off in the direction of the clientele, who dispersed in all directions. The pall of smoke did not disperse - I suppose all those carbon molecules were too stuck together with diesel fuel and Easy-Start - but rolled over the grass like some incarnation of the devil on a night out - until finally disappearing into the River Avon.

Once the motor had settled down, I'd reset the points and inch the loco forward onto the main track. The next job was to put the points back, and fit the bolt that played the part of a facing point lock, and then back down onto the train. Couple up, and we were ready! The first trip of the day was without passengers, to check the condition of the track and remove any obstructions, such as the odd supermarket trolley, that may have appeared overnight.

And then to business. I'd nip over the overbridge and open the gate, allowing a sea of smiling faces to cross to the platform and board the train. I'd grab my change bag, and walk down the train selling fares.

Back to the loco, and look back to check all arms and legs were inside the open coaches. Two blasts on the horn, and we were off. It was only a short track, so we always did two laps. As I said earlier, it didn't pay well, but it was worth it to see all those smiling faces. Smiles are priceless.

On my last visit to the area, I managed to find the car park, but all traces of the railway, station and tunnel had gone. I recently read that the holiday camp is to be demolished to make way for an upmarket hotel complex. It seems that the England I grew up in has been lost forever.